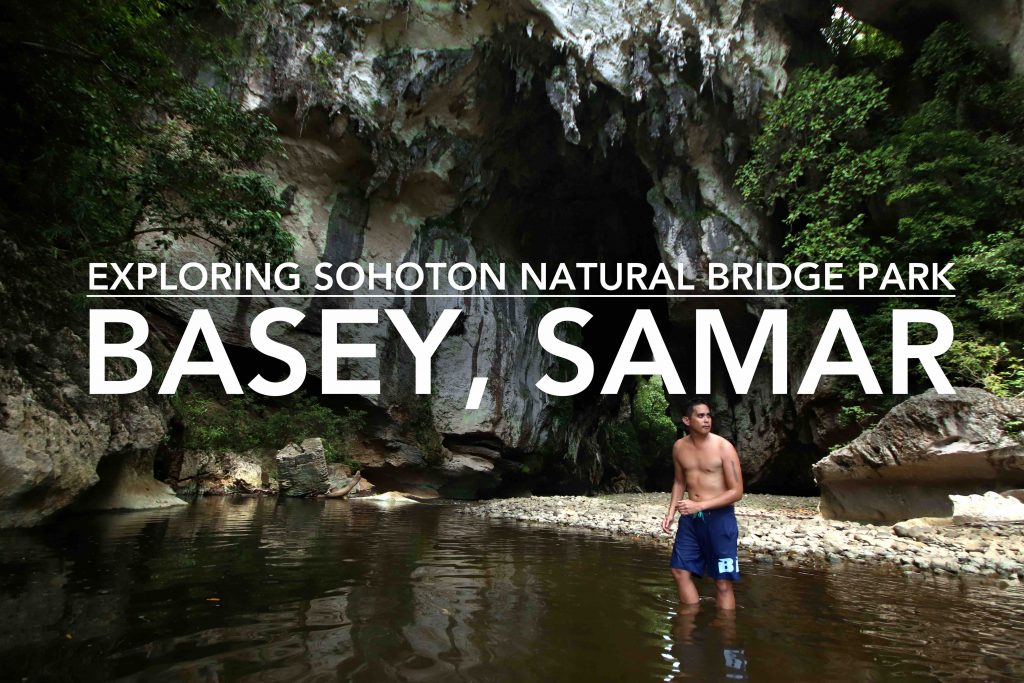 There’s another bridge worth exploring when you visit Eastern Visayas. Eons before the 2-km San Juanico Bridge – the longest bridge over water in the Philippines – was built to connect the islands of Leyte and Samar, Mother Nature has carved out her majestic counterpart inland along a limestone river gorge in Basey, Samar.

Located within the southern portion of the 450,000-hectare Samar Island Natural Park, Sohoton Caves and Natural Bridge Park (formerly Sohoton Natural Bridge National Park, established in 1935) is an 840-hectare protected area (not to be confused with Sohoton Cove in Bucas Grande Island, Surigao del Norte) that covers a jungle-lined river meandering through limestone cliffs, arches and, finally, a natural stone bridge connecting two ridges. The historic caves of Sohoton are important Stone Age and Iron Age archeological sites that later on became guerrilla hideouts during the Philippine-American War. More recently, these natural formations have repeatedly served as sanctuaries for local villagers during natural calamities like Super Typhoon Haiyan (Yolanda), which ravaged across central Philippines in 2013. 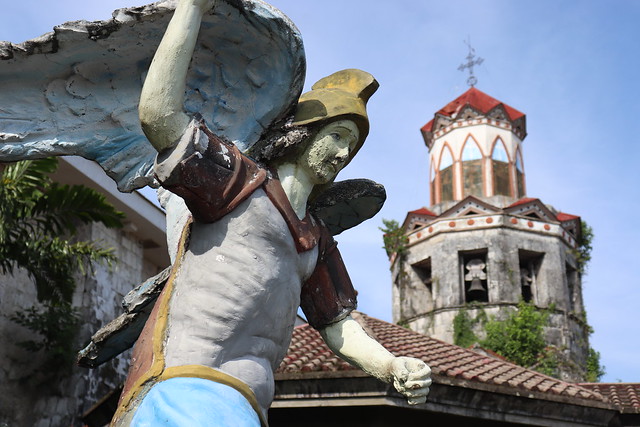 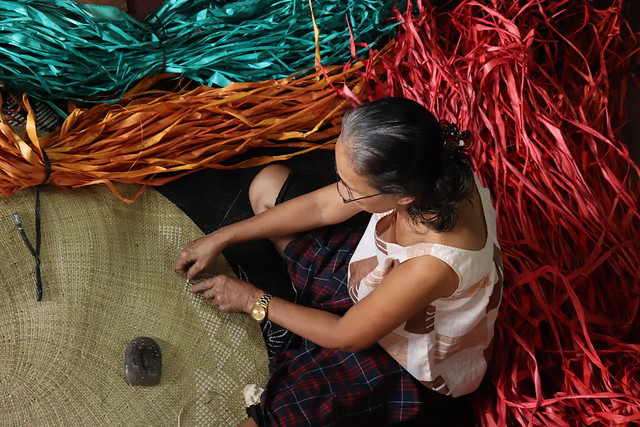 Crossing the iconic steel bridge traversing San Juanico Strait, we drove from Tacloban City to Samar island in about an hour, arriving in Basey (pronounced ba-sai), a heritage town known for its Spanish-period St. Michael the Archangel Church perched on a hill and the native handicraft of weaving banig (pandan mats). After quickly dropping by the town church and Delza’s Native Product, a local shop specializing in mat weaving, we moved on to Sohoton Visitor’s Center & Eco-lodge, the jump-off point to the national park along the Kadak-an River (Golden River), where our group was welcomed by dancers from the Mamanwa, an indigenous group from Northern Mindanao and Eastern Visayas, in vibrant traditional attire. 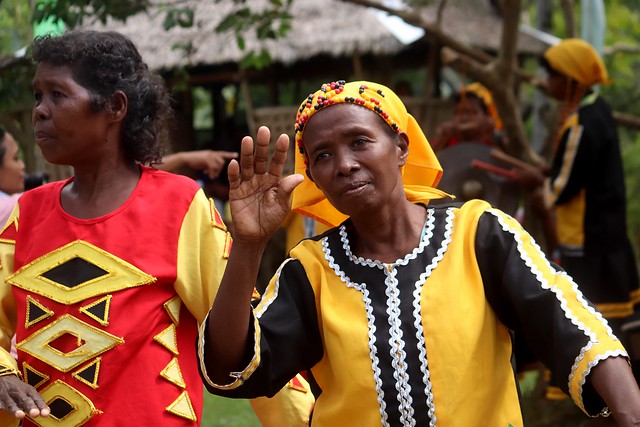 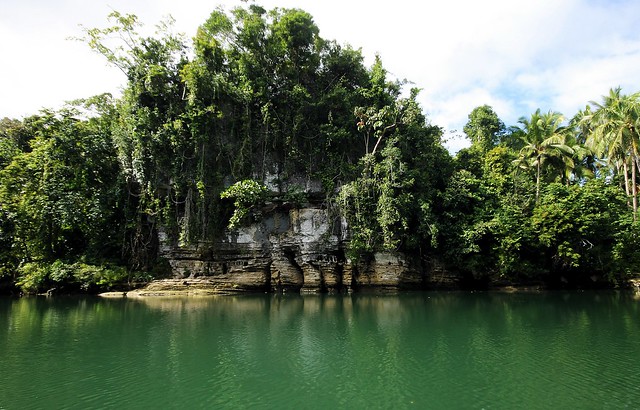 Cruising along the verdant Kadak-an River 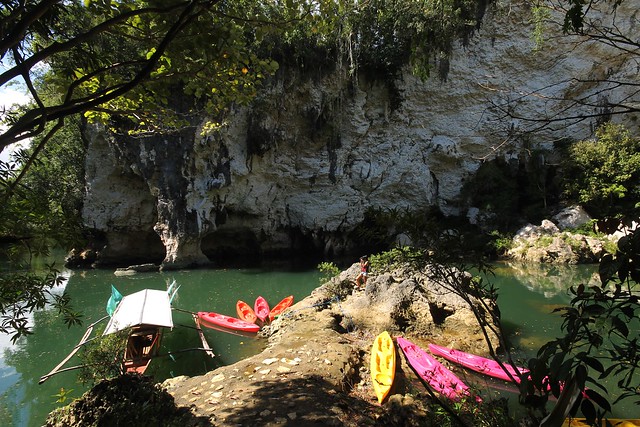 Panhulugan Cliff marks the middle of the park where kayaking begins

After registering, we then walked down the floating dock along the river to board canopied outrigger boats that ferried us upstream to the park entrance. The waterway is nicknamed “Golden River” when strong rains turn the water into an ochre brown color. The Kadak-an River during our visit, however, was clear, mirroring the nipa and coconut trees lining the banks. These were later replaced by limestone walls, until we reached a sharp bend in the river three kilometers upstream facing Panhulugan Cliff, a limestone precipice draped in foliage. The feature takes its name from the word hulog or drop, referring to the time when the vicinity was a hideout during the Philippine-American War for Filipino guerrillas who would drop rocks and boulders onto unsuspecting enemies who would enter.

We walked up a concrete path, passing by two guitar players who entertain tourists with Waray folksongs, to the entrance of Panhulugan Cave. The walk-through subterranean tunnel was a walk in the park compared to the technical caves I’ve visited elsewhere in the province on a previous trip. Nonetheless, it’s an interesting attraction for those looking for a caving activity that isn’t strenuous.

Carrying lamps and flashlights, we followed the guide who pointed out the different speleothems inside the chambers, which included limestone drapery that produced a pleasant xylophone-like sound when gently hit with bare hands. (This is something that now only the guide is permitted to demonstrate, but something that, in my opinion, should be altogether be avoided to prevent untoward damage to the formation which has already been partly broken from previous careless attempts.) Some formations look like Christian icons; a cluster of stalagmites in one passage, for example, resemble the Holy Family (Mary, Joseph & Young Jesus) and was covered with rosaries and coins left behind as offerings by devotees. 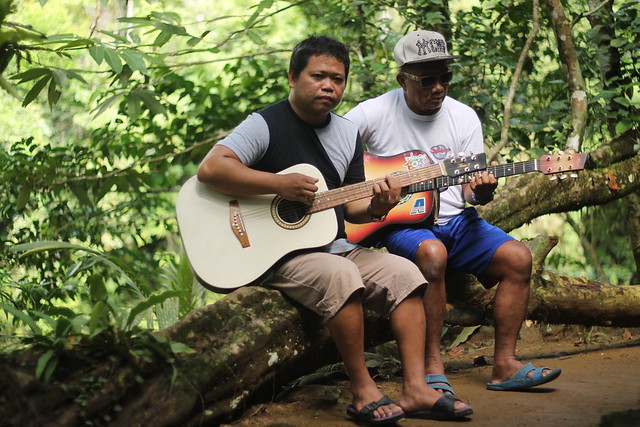 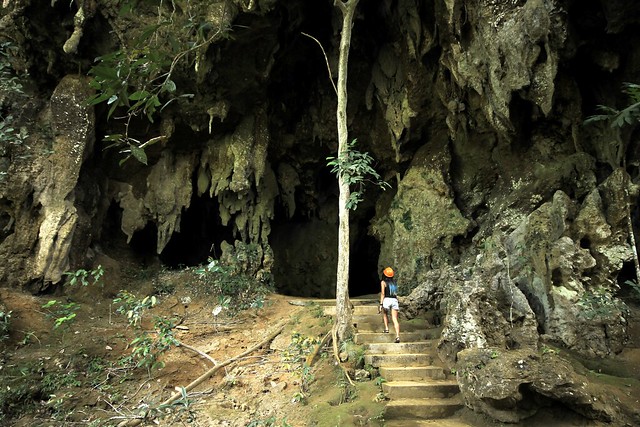 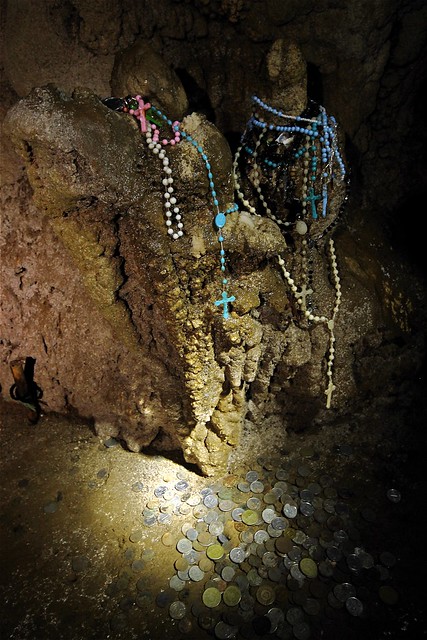 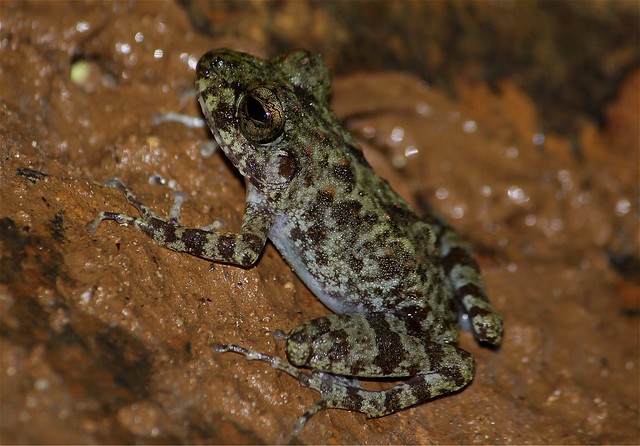 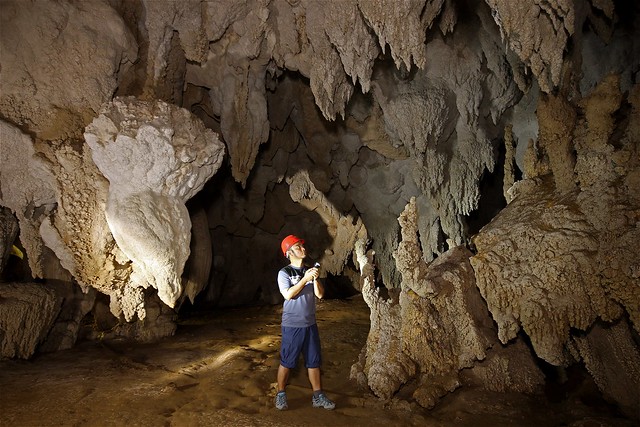 Beautiful speleothems within the inner chambers of Panhulugan Cave

Furthermore, we spotted some native wildlife like bats and camel crickets. The most interesting find was a small mottled frog, which was later identified as Walter’s limestone forest frog (Platymantis bayani), a species only found on Samar Island that was first described by science in 2009.

After wandering in the cave for more than an hour, we walked back to riverside and boarded in pairs onto kayaks, each accompanied by a local guide. We paddles farther upstream into more scenic portions of the river, which, at some portions, became shallow streams flanked by more limestone cliffs. After about a kilometer, we reached a formidable wall with an arched opening through which the river flowed. This was one of the main features of the park called Sohoton Cave, which opened to a cathedral-like dome with a skylight above a great swimming area. Along the western side was the Sohoton Natural Bridge, connecting two forested limestone ridges. The formations draw their names from the local word so-oton, meaning to fit in or go through a small passage. The waterway runs underneath natural bridge as a shallow stream. After taking a swim, we walked under the giant archway to the other side for better views of the majestic limestone formation, an impressive finale to our scenic excursion into the rugged interiors of Basey. 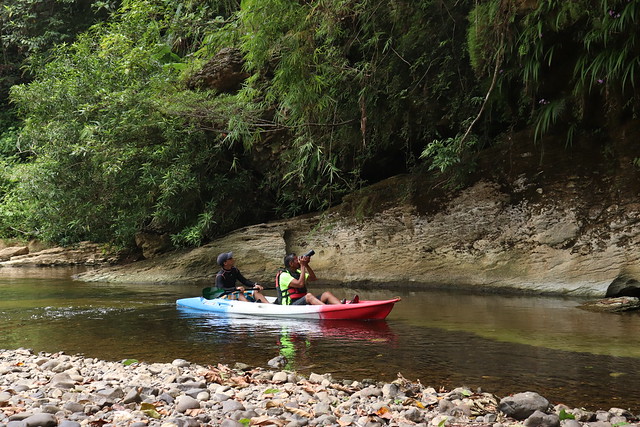 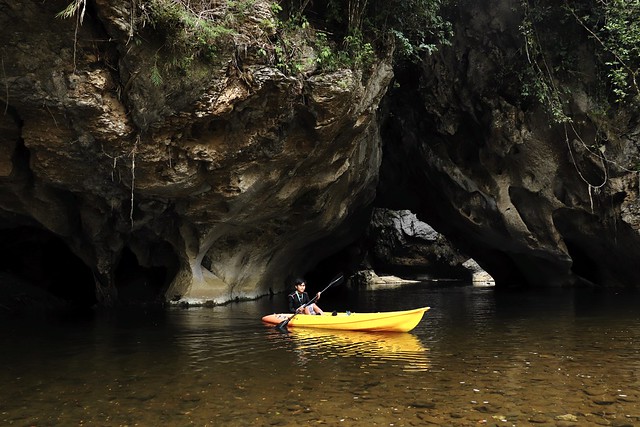 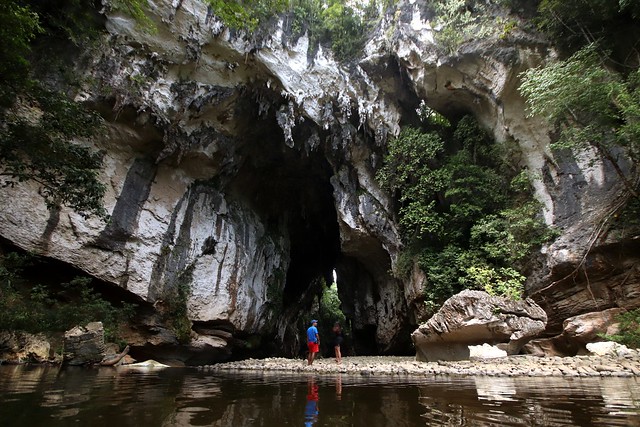 Tacloban City has the nearest airport from Basey with commercial flights from Manila and Cebu. From the Tacloban New Transport Terminal, take a van to Basey town where you can register and settle fees for tours at the Municipal Tourism Operations Office, located at ABC Hall Building across the Municipal Gymnasium.

Alternatively, you can ride a habal-habal (motorbike) to the Sohoton Visitor’s Center & Eco-Lodge in Barangay Wespal, the departure point to Sohoton Caves and Natural Bridge Park.

This blog post was made possible through the media tour of Samar-Leyte from August 19 to 23, 2018, organized by the Tourism Promotions Board of the Philippines, under the Department of Tourism (DOT).