7 Great Things to Do in Moalboal, Cebu

Moalboal is a small beach town located at Cebu’s western coast, about 3 hours drive from Cebu City. It has been famous for decades now as one of the best diving spots in the Philippines, but lately started gaining more recognition as an all-around fantastic vacation spot.

Accommodation and general amenities are heavily skewed towards the backpacking crowd, so if you are looking for a luxurious holiday Moalboal is probably not the place you’ll want to stay at. That said, there are still plenty of very nice resorts and other modes of accommodation in and around town.

So, if you prioritize the peace and authenticity of nature over staying at the big city, you can’t go wrong! As you’ll see below, there is no shortage of amazing activities to try while in Moalboal. 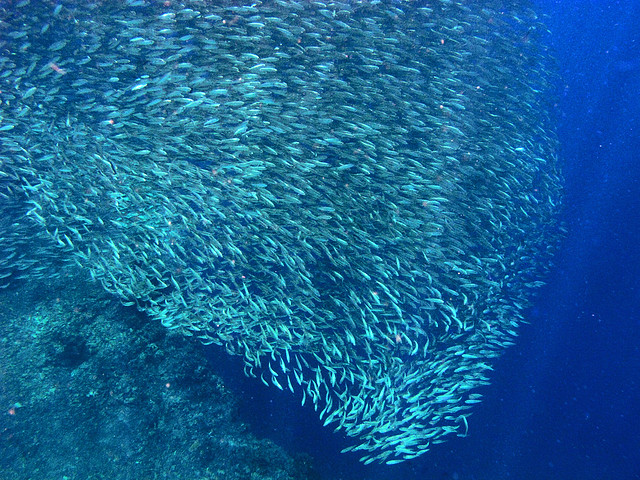 As mentioned, the main attraction in Moalboal is the spectacular diving opportunities it presents. Above all else, stands the “sardine run” at Pescador Island. The reason why Moalboal is such a great place to dive at is the unbelievable variety of marine life – and no place epitomizes that better than Pescador Island.

The island is home to millions of small sardines, which in turn attract larger fish who prey upon them. Even thresher sharks have occasionally been sighted at the scene! While it is undoubtedly better to dive there, tours which only include snorkeling are also available and can be booked in town. Either way, witnessing firsthand the vast richness of the underwater kingdom of Moalboal is a memory which lasts a lifetime. 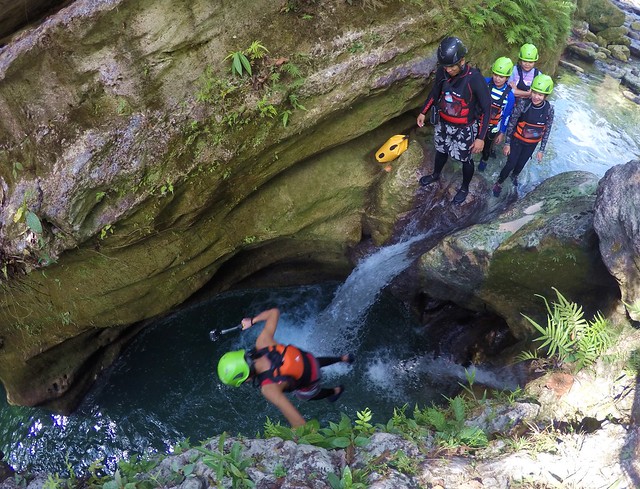 Often described by visitors as the best activity they had during a vacation in the Philippines, this tour is the perfect land-based counterpart to Moalboal’s fantastic marine adventures. The trek takes you downstream through the lush jungles, as you slowly make your way towards the famous Kawasan Falls. It takes around 4 hours to complete, and includes countless adventures along the way.

Canyoneering involves rappelling, swimming and cliff jumping, and the one in Badian is no different. The difficulty level is easy to moderate and this tour can be done by almost anyone, so there’s no need for concern in that regard. It only goes out in groups and availability is limited, so it’s best to book a day or 2 in advance. It’s quite easy to find touts who promote it on the main street, but if you are looking for something a bit more professional, consider booking it through Cyan Adventures or Planet Action instead. 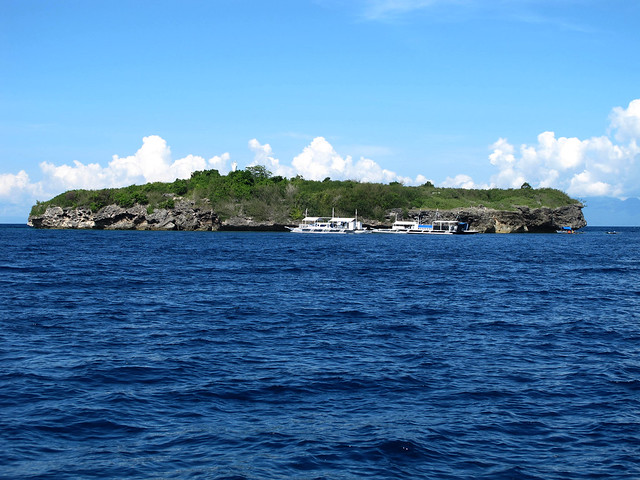 The main highlight of this tour is Pescador Island, so there’s no point in doing it if you already plan to dive. For those who aren’t that much into diving, this offers a great opportunity to see what Moalboal is all about, as well as a few other nice attractions sprinkled in between.

Aside from snorkeling in Pescador, other activities include swimming with sea turtles and kayaking. Lunch by the beach is also included in this tour. Standard starting hour is at 7:30 am and the tour ends with lunch. It is also quite common to first take this tour, then continue immediately to the canyoneering one mentioned above. 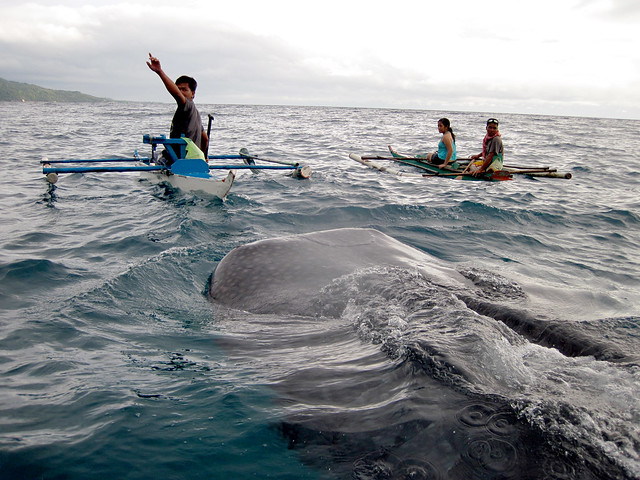 Visit the whale sharks in Oslob

This one is the most famous attraction in Cebu Island and bears no further introduction. It might be the only chance you’ll have at witnessing these gentle giants in person, not to mention swim next to them and take awesome pictures! What many people don’t realize though, is that it’s much easier to reach Oslob if you are based in Moalboal rather then Cebu City, as it only takes 45 minutes instead of 2 hours or more.

Regardless of where you take it from, this activity always begins very early as it is based around the whales feeding habits. The whole experience is relatively short and that means you’ll typically be done by around 8 or 8:30am the latest. For that reason, it is recommended to combine a visit to Oslob with any of the other activities mentioned above.

You can even go for the triple combo package of Oslob, Pescador and Kawasan on the same day, which is currently offered by Philippines travel package as part of their Cebu services. This option is very demanding, but ideal for those with a short time who want to really get a taste of everything Moalboal has to offer.

Editor’s Note: While the local community has found a lucrative alternative source of livelihood by providing whale watching tours and no longer treats the marine animals as a nuisance, conservationists question the sustainability of these tours due to the negative effects of feeding the animals.

Relax at White or Lambug Beach

The main beach, right next to town, is actually Pangasama Beach. This is where all tours depart from, and where most resorts, bars and restaurants are located. It isn’t however the nicest beach in Moalboal, as it is typically crowded and the view is largely obstructed by invading buildings and boats.
Instead, it’s much better to venture a bit further and visit either White Beach or Lambug Beach which are both much nicer and quieter. While possible to reach by foot, both are quite far so it’s much better to go there with a rented motorbike.

This is an activity which is also included in the island-hopping tour, but can easily be done separately and even in DIY style. The turtles are found right next to Pangasama Beach, so it is very simple to reach and is a great activity which you can complete in less than an hour.
The sea turtles in Moalboal can usually be found very near to the beach itself, at depths varying between 6 and 8 meters. For that reason, there’s absolutely no need to dive and you have a very high chance of spotting multiple turtles even if you are just snorkeling and nothing else. 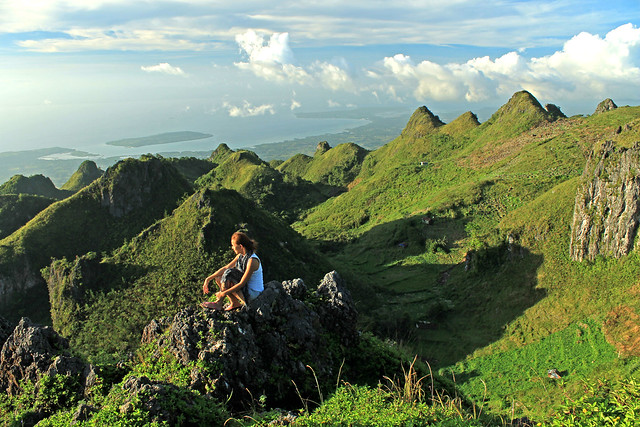 Being from Cebu myself, I decided to save the best for last. If you want you can read a more detailed description of my hike to Osmeña Peak but it is suffice to say it’s one of the most rewarding things you can do while in Cebu Island. That is especially true if you are a fan of hiking in nature and day-long treks.

The view from the top is simply breathtaking and reveals the province in all its beauty and glory. There’s nothing quite like hiking all the way to the top and then enjoying a small meal or a cold drink over there, overlooking not just Cebu Island but on clear days most parts of Visayas.

Similarly to Oslob, this activity can be done from Cebu City, but the drive to the starting point is much shorter if you are based in Moalboal – giving you just another small incentive to include the hike in your Cebu itinerary.

How to get there

Getting to Moalboal from Cebu City is extremely easy and cheap. The best way to do so is by taking a bus from the South Terminal. These lines are operated by Ceres and usually leaves every hour. The drive takes roughly 3 hours, depending on traffic and other conditions. You will be dropped at Moalboal town center, from which you will need to make your own way (5-10 minutes’ walk) to the resorts in Pangasama Beach. The bus ride costs 116 Pesos.

How to get around

The easiest way to get around is by renting a motorbike. The distances between places are quite long, and it can be hard to find a tricycle at night. So for example, if you stay at Pangasama and realize too late in the day that you need an ATM machine, which is only found in town, you’ll probably have to walk 10-15 minutes in each direction.

You can rent a bike as you arrive, there are plenty of vendors just waiting around the bus stop at Moalboal town center. However, if you want to be extra safe, you can take a tricycle to your hotel first and then ask them to help you rent one instead.

3 Replies to “7 Great Things to Do in Moalboal, Cebu”